The degree of interferenence to an 80m station from an inverter based generator & attached cord radiated RF noise coupling into the Field Day antenna will vary somewhat based on the station physical arrangement. The graphs below are the received signal into an 80M station antenna located up 55 feet in the air, with a 50 foot drop cord lying on the ground underneath a portion of the antenna that connects the generator to the load. 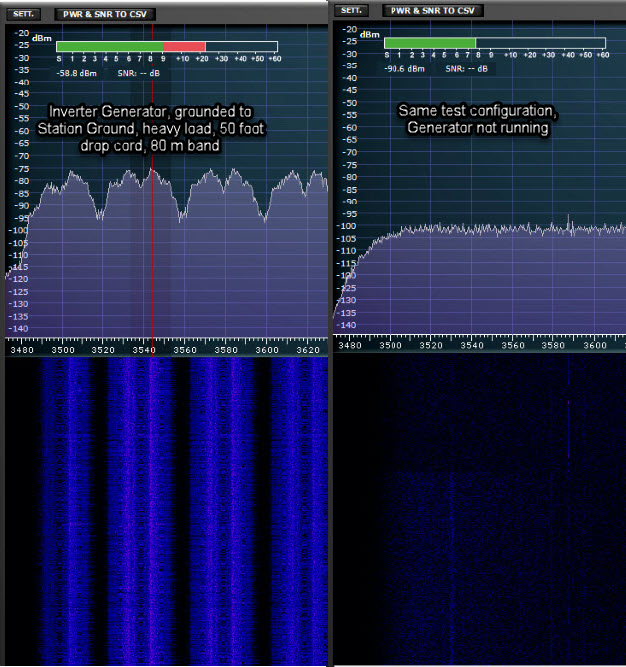 Thinking about running your Field Day station directly off a generator and not using batteries?

There has been discussion of eliminating batteries all together (as the Field Day rules permit) and run the station on a small generator. Tests should be done before Field Day with the specific AC to DC power supply and generator to be used to determine if the fluctuating loads of a CW/SSB transmitter is going to cause deep fluctuations in generator engine speed.

Why would one care?  Most hams know that with synchronous (aka constant speed) generators the frequency output is determined by the speed the armature is rotating, and the number of poles in the armature.  What may not be known is that the raw voltage output of the generator winding varies proportionally with speed at which it passes through the magnetic field (aka armature rpm). That’s why all synchronous generators have a voltage regulator circuit that adjusts the other variable affecting voltage output, the strength of the magnetic field.  The question is how well in a consumer quality generator does the voltage regulator and, the mechanical engine speed governor handle wild fluctuations in electrical load.

Rather than expose expensive radios and DC power supplies to such effects,  one fix could be to still use a battery or two in the 12VDC circuit to buffer the generator from the wildly fluctuating loads such as a CW transmitter.