A week ago, at the Pittsboro Virlie’s Grill ham’s breakfast, Herb Allred, N4HA, mentioned he had entered an antenna design competition and been awarded 3rd place. We all congratulated him.

Nick, KA1HPM, found Herb’s name in the latest issue of QST. What he discovered was that Herb had placed 3rd in the 2017 ARRL Antenna Design Competition for “80 through 10 Meter” antennas ! His design was for “A 20-Meter Two-Element Wire ‘IV’ Beam.”

This is a significant accomplishment with a cash award and possibility of publication !

The recent ARRL North Carolina Newsletter contained information suggested to be included in letters hams may wish to write to their senators regarding Senate Bill 364. This topic was discussed at the OCRA April 10 club meeting. Members asked that the following additional information be put up on OCRA website.

When the city of Chapel Hill considered a similar cell phone use ban while driving, the following information regarding federal pre-emption was presented at public hearing and accepted by the city council to be incorporated into that proposed ordinance. That proposed ordinance was later withdrawn and did not become law.

In further research of NC General Statute 20-79.4 which authorizes and establishes the terms and conditions for issuance of Amateur Radio license plates, it would appear that this statute requiring applicants to “assert to the Division that a portable transceiver is carried in the vehicle” and then have SB364 declare usage of such equipment illegal to be a contradiction of logic.

While positions taken by the ARRL and the FCC are summarized below, I recommend you read the documents at the URL links below and use that information in letters you may choose to write to your senator on SB364.

suggested wording to your senator…
In reading about the proposed ban on the use of electronic devices in automobiles, it would appear that broad wording also covers mobile operation of Amateur Radio which is regulated solely by the Federal Communications Commission.

If SB-364 goes forward, I strongly recommend the bill incorporate wording as included in the link below, excluding Amateur Radio Operation in order to avoid your ordinance be in conflict with federal law.

The American Radio Relay League (ARRL) also has a long track record of bringing before the Commission, Requests for Issuance of Declaratory Rulings on ordinances affecting amateur radio that go beyond the scope of authority granted to States and Local Governments.

Lastly, for your information, the link below is a ruling by the FCC that, while not specific to the cell phone issue, does include a number of findings on the safety of mobile Amateur Radio operations and recites the authority of the FCC to act and respond to state and local laws that are in conflict with federal law.

excerpt from North Carolina General Statute 20-79.4. Special registration plates.
(a1)      Qualifying for a Special Plate. – In order to qualify for a special plate, an applicant shall meet all of the qualifications set out in this section. The Division of Motor Vehicles shall verify the qualifications of an individual to whom any special plate is issued to ensure only qualified applicants receive the requested special plates. 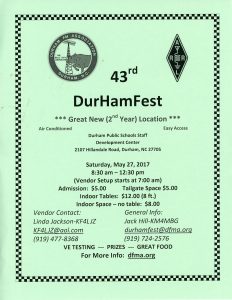